We’ve met the father of the Blues, so now let’s meet the mother of this timeless style. Perhaps the original Blues diva, we’re talking about the first really recognised Blues singer, Ma Rainey. Born in Georgia 1886, Gertrude Pridgett was from a musical family, and had a natural talent for it. She was winning talent shows by the age of 12, and was performing regularly with her parent’s travelling band by the age of 16. 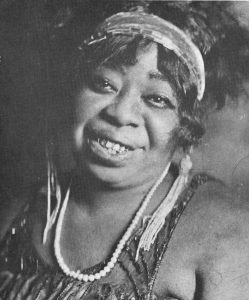 Her talent wasn’t fully recognized until 1902, when she heard a touching song about unrequited love. Her musical brain got to work and she soon had it memorised. It wasn’t long before she was using it as her closing act, stunning audiences with her powerful, passionate voice. As she toured, spreading the sound of the Blues across the Deep South, a number of imitators fell in love with her style and adopted it themselves.

She married William Rainey and together they performed as “Ma and Pa Rainey; The Assassinators of the Blues”. They spent the next twenty years travelling the country, spreading their sound well out of the Mississippi Delta, as far as Texas and the Atlantic coast. Their lyrics blended the joys of love, with the desperation of struggle and poverty, moving the hearts and souls of the audiences they performed to.

Ma Rainey is widely considered responsible for training and making a star of a young Bessie Smith, who joined their show as a dancer in 1912. Ma soon saw her potential, taught her to sing and became a huge role model to the young Bessie. In 1923 they both signed record deals, following the success of the first ever Blues song to be recorded – Mamie Smith’s “Crazy Blues”.

Ma spent the next six years recording over a hundred songs in the studio and went on to perform to packed out theatre audiences, alongside famous artists such as Louis Armstrong before comfortably retiring in 1933. Aside from spreading and defining the Blues, the original Diva paved the way for other black female singers to make their own way in life.