The history of the Blues is as rich as the music itself, and is full of characters that helped shape the genre. Indeed, there are a great many amazing Blues performers who are forever lost to history. However, there are some legends whose names have survived the passing of time, even though their music may never be heard in its original form again.

We’re stepping into the realms of Blues mythology here, as there is very little information known about Henry Sloan. He never recorded or wrote any of his music down, but his name crops up time and again. He was born around 1870 and lived in Clarksdale – considered by many as the birthplace of the Blues, with the Dockery Plantation at the epicentre. 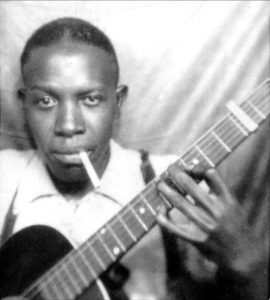 By the 1900’s it’s widely agreed upon that he was a popular bluesman, singing and playing his guitar to crowds all over town. But it is his alleged tutoring of many young, future Blues legends that has got people talking about him. Blues singers such as Charley Patton, Robert Johnson and Willie Brown all apparently learnt the ropes from Sloan, and this is why his influence is so recognized. In 1917 he boarded a train to Chicago, never to be seen again. Some theorise that it was Sloan that W.C Handy heard that fateful day at the railway station..

This mysterious, hugely talented Bluesman laid the foundations for beautiful, emotional, poetic lyrics. His songwriting, guitar playing and singing are legendary and have been covered many times over the years. It’s said that he made a deal with the devil in exchange for his musical talent. Sadly, the devil soon came to collect what was now his, and just months after mastering his talents, Robert died at the age of 27. He was a true enigma, and his 29 recorded songs laid down some core Blues principles that survive to this day.